Multi-level intimacy, reciprocity and mutual meaning and purpose are three things you can do to create love on purpose in your relatio 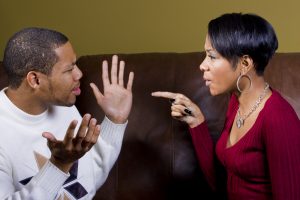 nship. While these three things build good relationships there are five practices that can destroy a relationship as they become habits.
Relationship researchers tell us that the way you fight is the clearest sign of whether a relationship will fail or not. Couples who are least likely to survive fight to win. Now I know that sounds ridiculous to some of you, right? “Of course we fight to win”, you’re thinking. “Why else would anyone fight but to win the fight”? I know that’s what most of us came to believe, but think about this, if someone wins the fight, logically someone has to lose, right? And when someone loses, there is ongoing resentment and simmering anger long after the reasons for the fight have been forgotten. This makes for a toxic emotional atmosphere which is bad news for your happiness.
So what do couples do who have good relationships? They fight, yes, but they purposely fight not to win but to solve a problem together. They learn to fight for the relationship and they focus on making sure their partner knows that the commitment is to the integrity of the relationship. All of us who are in relationships fight at some point and we all say and do things that hurt and make for a toxic emotional atmosphere sometimes. The difference is that couples who do well, purposely avoid doing that most of the time. Couples who fail, fight without thinking and with a focus on beating their partner into submission. As I said earlier there are at least five practices that failing couples do most of the time when they fight. The negativity begins in your head.

1. Distrust
Couples who don’t practice multi-level intimacy can be disengaged from each other. They may feel like strangers or at least distant acquaintances, which does not lend itself to trusting each other, and trust is an essential ingredient for a good relationship. Failing couples who fight,  often express and exhibit distrust of their partners motives, intentions, actions and purposes. In other words they distrust everything their partners say and everything they do and they’re always on the lookout for being tricked, or hoodwinked . This makes it difficult to hear what their partner says and even if their actions seem sincere or positive for the relationship, this suspicion won’t allow them to accept it.

3. Expressions of Disrespect
Don’t you hate when you’re arguing with somebody and they suck their teeth at you, or roll their neck or worse, throw up a hand to your face and sneer at you “whatever”! When that happens are you thrown off your thinking like I am? Do you start stammering in surprise? Or do you punch back with a barrage of disrespect of your own? It’s hurtful to realize so intensely that the one you love does not respect your ideas, your words, your actions or even your character, the person you are at your core! Criticizing your partners character with universal all encompassing insults like “you’re so stupid” insures that the night won’t end well. Invalidating a persons ideas as unimportant or irrelevant and others signs of your contempt certainly won’t bring you closer. All of these actions I named above are universal visual and audible expressions of disrespect. All these expressions trigger us into defense mode when we see them. Rather than making us want to work with our partner, disrespect pushes us further away. And if we’re the one expressing the disrespect, while it might make us feel witty or vindicated, or even thrill is to see the look on our partners face that they got our message that they suck, we still realize that what we are doing is not getting us the love we really are wanting from our partner. The great thing about disrespect and all of the other toxic practices I’ll discuss here is that they are in fact practices they are things you are doing, which means you can choose to do something else. Really! You can choose not to suck your teeth, or criticize their character or even throw your hand in their face! Really you can choose not to do it. And if you make that choice you will be amazed at how more likely you are to get what you really want from the relationship.

4. Attack focused offenses
I’ve been saying that couples who are failing fight to win. Of course what would a winning strategy be without a good attack? You might recognize some of these attack strategies if I give them some descriptive names. Machine gunning is when a partner aggressively fires one, two, three and even more questions, accusations or demands your way at one time and expects a reply to each one immediately! Not only don’t they seem to take a breath as they scream out rapid fire invectives at you, they don’t allow you to breath. People who machine gun their way through arguments, approach relationships like prosecuting attorneys with the idea that if they can overwhelm you with words, maybe you’ll collapse in regret and admit your guilt or become so confused by their verbal intensity and brilliance that you’ll just admit that they were right all along! But even if it did work out that way, once again losers are resentful and if somebody wins, everybody loses. Then there is the bull dogging. You’ll recognize this in yourself if you find that you can’t let a subject go. Even when it seemed that your partner agreed with you about a thing, you bring it back and shake it in their face again and again! Finally closely related to bull dogging is grave digging. This is when in the middle of an argument about something happening right now, one of you decides to retrieve a long dead memory of a hurt inflicted by your partner sometimes years ago, because the right now situation triggers the dead memory. So what do you do? You dig up the long forgotten dead thing and drop it at the feet of your partner while smartly throwing your head back in vindication as if there is nothing more to be said and you’ve proved your point. Believe me, grave digging is a relationship killer! Make up your mind that you won’t do it!

5. Rope a dope defenses
The last thing I want to warn you to stop doing is using the rope a dope. You know, like Muhammed Ali against George Foreman, in the Rumble in the Jungle fight back in 1974. Ali just pretended to be trapped against the ropes with his arms up defensively while Foreman wailed away with all of his power using every punch he could muster. Before long Foreman was totally exhausted and could barely hold his arms up allowing Ali to pummel him to defeat. So what’s that got to do with a lovers argument? Whenever you or your partner refuse to talk; walk away from a conversation; refuse to acknowledge that there is a problem or refuse to acknowledge that they are contributing to and being affected by the problem, that’s a form of rope a dope. It’s an unfair, defensive way of fighting without fighting. The objective is to tire the partner out in hopes that they’ll just give up and go away, forgetting about what they were arguing about. But just like all the other toxic ways of fighting above the top a dope leaves a bitter taste in the mouth.

Stop the Toxicity!
If you recognize any of these toxic fight practices, I hope you also see how they can only make your relationship more unhappy. Couples who do well mindfully choose not to do these things when they argue. You’ll notice I didn’t say these couples don’t argue. Arguing between adults is simply the way we negotiate through our differences. These couples still argue but they don’t fight dirty! They don’t rely on these or other toxic fighting practices. They teach themselves to fight fair on purpose. It’s not easy, but it’s simple if you decide to do something different. Sit and have a conversation with your partner about learning how to love on purpose. Decide to get help from a trained and committed professional therapist or coach who understands these principles. Until next time, be mindful, keep practicing and be committed to loving on purpose!

Three Principals for Loving On Purpose!

"I'd love to hear from you. Contact me to schedule a free 15 minute consultation."

I am a licensed family therapist (LMFT) in private practice in metropolitan Atlanta. I serve on the editorial boards of several professional journals in my field.

I enjoy working with couples in relationship therapy and with individuals working through life challenges.

I am an internationally recognized expert in cultural issues in therapy, social justice and narrative approaches to therapy.

Websites for Therapists by TherapyTribe — Up ↑